Last week Mark was travelling abroad, to either Atlanta or Montreal (he does that quite often, so I always get confused with dates and locations). I, of course, stayed alone with Bella. She behaved OK in general, and my brother-in-law even took her for runs and so on. So, she was fine.

The night before Mark's arrival though, she got completely insomniac. Restless. Whimpering and walking around and jumping and throwing her toys everywhere. For two or more times she wanted to go outside to the back garden. And it was already LATE. Past midnight. Being outside, there was an almost full moon, which made me dread that she would soon start howling because she was walking around, wagging her tail and looking very impatient.

This predicament lasted and lasted. At one stage I Skyped my Mom, who saw Bella playing and jumping like a little mad thing in the webcam: "Andrea, isn't there a way to give her some beer or something???"... Of course not. Restless she was. I even forgot about using some lavender to calm her down. That usually works.

Anyway, when it was almost 4h30am I was exhausted and decided to bring her to bed, using a little chewy bone as a bait. She came to bed with me, I laid down, but still she would not stop. Jumping all over me, biting my ear, grunting like a little pig. Until I had the idea of holding her and have her laying down beside me. I kept holding her, cuddling. And I started to sing lullabies! Brazilian lullabies ("O Cravo Brigou com a Rosa", "Sapo Cururú", and some songs, making up lyrics and even melodies). I noticed that when I paused, she wouls scratch my arm with her little paw as if saying "Continue, please"... OK, sing, sing, sing... After 15 or 20 minutes she was fast asleep. And stayed so until the morning when Mark arrived!

So, lullabies really relax! My Mother said the next day I should get some CDs ready for her (what??? Okaaay...). Anyway, here's one little picture I took on that night. That's how she was behaving! 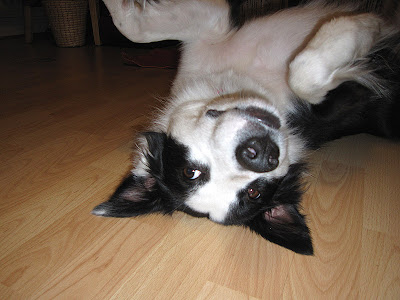 Posted by Andrea Leite Marques at 9:49 AM