Yesterday we also took some pictures of the streets. Again, in Brown Thomas they had artificial snow being released outside. It look really pretty, although I don't even think they will be needing that machine for much longer. Temperatures here had a real drop last night, and I am sure the White Winter will be arriving soon.
Before and after Sunset... 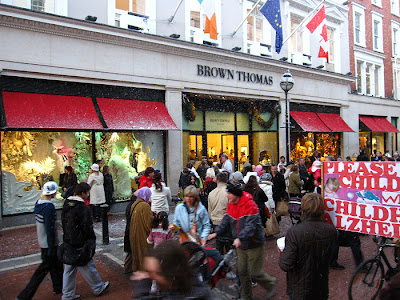 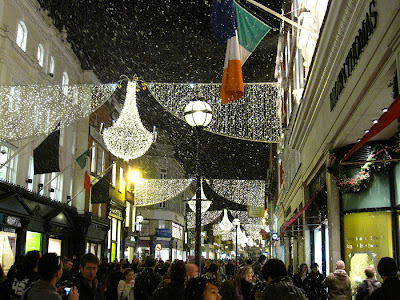 In the Brown Thomas Hermès boutique there was a little exhibit on Kelly bags. There was a giant Kelly inside the shop, where people could go inside and... Well, I don't know because I did not go inside. I thought it was interesting, but a bit weird at the same time, since once you were in it, it would move a bit, like it was floating or something. Somehow I did not fancy the idea of being inside it. Here are some shots though. I must say I am NOT a fan of Kellys or Birkins, by the way. Not only (and foremost) because I could NOT possibly afford one, but mostly because I am very far of being on a "classic" vibe regarding clothes and accessories anyway. I am more of a Kipling, Radley and d'Autore bag kinda girl. Really. However I must say I love most Hermès perfumes and their lovely scarves (carrés). Oh yes, I do! 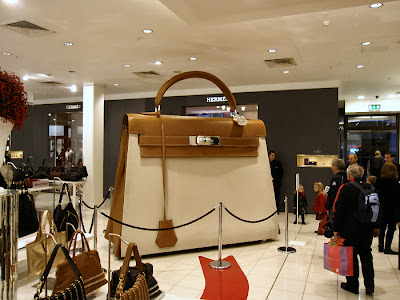 And, talking about bags, here are some pictures I got from the Louis Vuitton windows, also in BT. Again, not my kind of bags (Mark, rejoice!!!), but they look very pretty anyway... 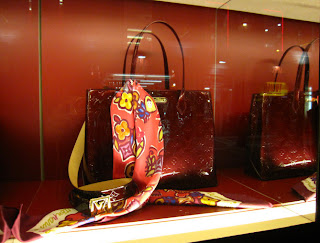 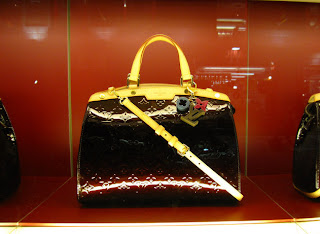 Now back to the handbags once again, these are designed by Marc Jacobs, who is in charge of the LV design for clothes and accessories nowadays, and already for some time. He really gave the house an injection of modernity, with new textures and contemporary designs.

I absolutely favour soft, slouchy bags though, and don't really like sturdy, hard ones - as is the case with most LV and Hermès. I must say though that one LV item I would perhaps consider having one day is a Murakami Sakura one, where the LV logo is mixed to lovely pink cherry blossoms with a happy face. But that is from a collection from some years ago already. So...

Now, the Christmas decorations in Grafton Street were quite pretty and elegant. Big spherical chandelier all over, which would lighten after the Sun was down... 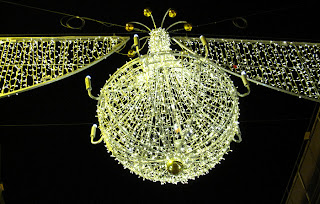 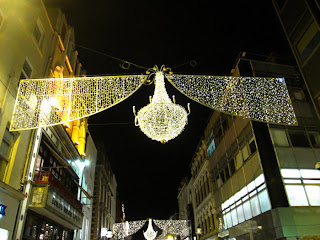 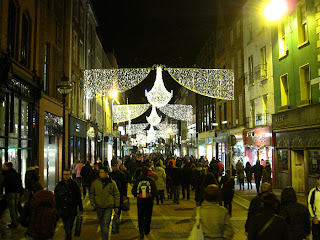 And, when we arrived earlier on, we saw some amazing therapy dogs: 2 Labradors and 1 Samoyed. The Samoyed reminded us of Bella. Not physically of course, but his behaviour that was pretty much similar. He was ALL over the place. His name was Bruce, by the way.. A handful of a doggy, really! 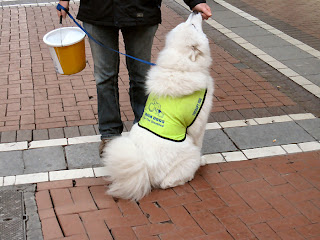 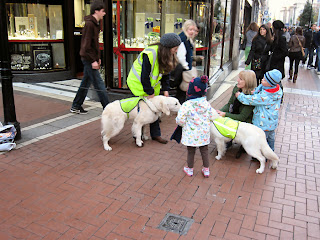 Posted by Andrea Leite Marques at 10:35 AM